So this will be my last post now until I start my little walk across the UK and i wanted to talk about navigation.

Now as my partner knows I am a bit of a map geek, I love getting a new Ordnance survey map from the shop, the crackle of the crisp paper as you unfold a new world, getting to know all the unique little names Eddy Grave Stake, Ashness Fell and the less impressive or imaginatively names Pile of Stones. Laying out maps on the floor and tracing routes around hills and dales, picking places that sound of interest is a great evening past time. It gives you an over view of a world that you may not otherwise see or be aware of. Dovedale in the Peak district is a great example of this, there are numerous cave systems around the valley and some you cannot see from the main path, i was fortunate enough to bring my map with me that day and after a short scramble away from the path, I was able to hide away and experience a world that is almost primeval, with out the map I would never have known they were there.

There is no other country (that I am aware of) that has developed such a mapping system for it’s own country and so this becomes a piece of British history and should be a great source of pride for us to celebrate.

It all started with a young 21 yo lad named William Roy, who commissioned by the board of ordnance, part of the British military in 1747, to map the Highlands. Admittedly it wasn’t done for fun or any eccentric reason as was the norm, but to help plan military campaigns against the dastardly Scottish (there a great bunch now though 🙂 ), this very early work took 8 years to complete but it wasn’t for a number of years that Ordnance Survey became officially recognised.

I’ve always been blessed with an almost pigeon like sense of finding my way home, I think this developed through my bodies way to adapt to drunken nights out and walking 10 miles across the local town home. This has served me well over the years and I can honestly say I am able to go to most places once and then navigate my way back.  I don’t know the names of streets but I am able to find my way via landmarks , I would say that I know my way around Birmingham better than Kerry and she keeps telling me she is a brummie born and raised.

As anyone starts to plan any walk or adventure,the attention turns to the route and involves looking at numerous maps. Doing such a well known route I’m blessed in that it is well mapped out already, but what I have noticed is the actual distance varies from 180 miles all the way to 210 miles. I assume this is due to the individual choices people make. Wainwright encouraged people not to directly follow his route but instead use it as a base to explore the areas and the route, hence the name ‘a coast to coast’ and not ‘the coast to coast’.

The route remains pretty much the same for who ever takes it on, there are easy parts and difficult parts, weather will be a great determiner of which route I take, it would be amazing to take in the spectacular heights along the route, but as in my previous post the weather can change in an instant. I do not plan to follow the route to the letter, I will avoid some of the early village and where possible miss some of the usual sections in favor of more straightforward routes.

Well that is the plan, to help me navigate I have the entire route printed from OS mapping and all sealed in waterproof cases, I will also be taking my new favorite toy, Garmin GPS system, this is a great little device and at times when low cloud, fog or bad weather interrupt the route it could be a potential life saver.

I have prepared and given a copy of the mapping to Kerry along with any route amendments that I intend to take along the way, this ensure that if the worse were to happen there will be an accurate reflection of where I was going.

So I am two days and counting, I still have a few items to pack, I will try to post pictures and updates as I am going but this will be only when signal allows. 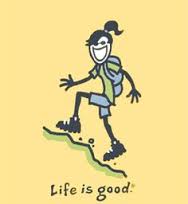