Swift pod number 2 did me well for my final nights sleep. 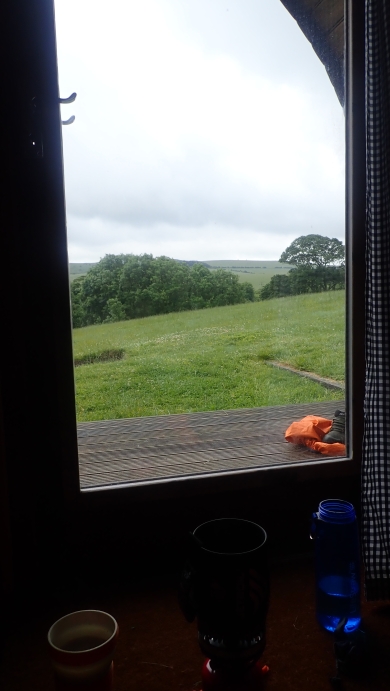 Using the tiniest radiator in the world, I managed to dry my kit to an acceptable level. Shoe’s remained damp and so socks would inevitably become wet as well.

I procrastinated somewhat this morning, I had been awake early as usual, watching my clock tick by, a leisurely breakfast of porridge was made and enjoyed in the open doorway of my abode. The weather was looking promising today, clouds had gathered on the horizon but having spent 3 days in virtual rivers then what could possibly be any worse.

Before long I was packed and fuelled and made my way down through the farm and swiftly joined the SDW route, a short bridge crossing over the busy A27, with a short wooded section leading out onto yet more rolling countryside. A section of strenuous climbing onto the Jugg’s Road Track where the path followed a ridge line overlooking Kingston near Lewes.

The views accompanying me to the left were spectacular as ever, looking North wards across the many miles of the Southdowns. To my right the many strangely named places of various bottoms, breaky bottom, long bottom, whiteway bottom, they love their bottoms here.

I passed into Southease, the delightful church, a mid 12th Century some of which is possibly pre-conquest, the round tower beset in flint just emerging from a hidden view gave a welcome sight and a most received photo opportunity

I crossed the Southease station followed shortly with a YHA stop, well it’d be rude not to. Breakfast was just being served here as I downed a tea and some cake, at only 6 miles I still had a fair old distance to go, another 19 according to the signs but over the last few months I’ve learned not to be to trusting of a signs reported distance too.

As I left the YHA, a group of youngsters gathered for the Salomon Youth Adventure Trust, they looked fresh-faced and ready for their day. The climb away was a steady and steep one switch backing towards Itford Hill, I forced marched keen to not let the youngsters pass me.

As we neared the radio station atop Beddingham Hill, a young chap and lass jogged passed me, they gave me encouragement and the statement that they werent sure how I was running with my bag, they were running the 20 miles to Eastbourne today with just light bags, but as they went off into the distance I kept pace with them which made me happy.

Firle Beacon I caught my young runners and was happy to snap some insta worthy shots for them and they returned in kind the favour, I told them of my journey and they seemed suitably impressed, snapped a selfie with me stating I was famous which made me chuckle.

We sad our goodbyes and off into the distance they went, this whole section was jam-packed with burial mounds, long barrows and tumuli. Long Burgh Long Barrow was my first Long barrow I had ever seen and what an impressive feature it made, stretching to some 180ft. 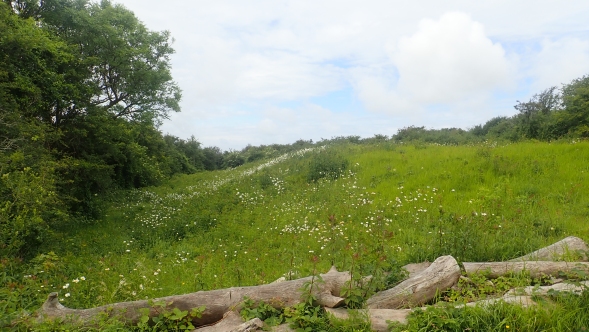 I passed into Alfriston where I made use of the fine cafe for a brew and bacon butty,

other runners started appearing and some asked me for directions, I believe they were taking part in the Longman Ultra, they sit here and followed the Cuckmere River alternative SDW route. I carried on and climb up again along a short road secton towards The Long Man, unfortunately I was the wrong side to appreciate this magnificent 235 ft chalk figure, it’s a little unclear how old this figure is with some saying it was cut in the 16th or 17th Century.

Jevington was my next stop, at my calculation I was some distance from my finish, I took a seat looking out onto the village and once ready off I set, my feet by now were burning and I could feel they had swollen, the skin taught as they bent in motion. I wandered slowly into the village and then discovered a most wonderful sign, 4 miles to Eastbourne, laughing aloud I plodded on, running was pretty much done for me now, it was just to painful, the straps from my bag digging into my shoulders so pretty much everything ached.

My original route ended a little over 2 miles away but accommodation was on the sea front so I manned up and decided to eek out the distance to the end. 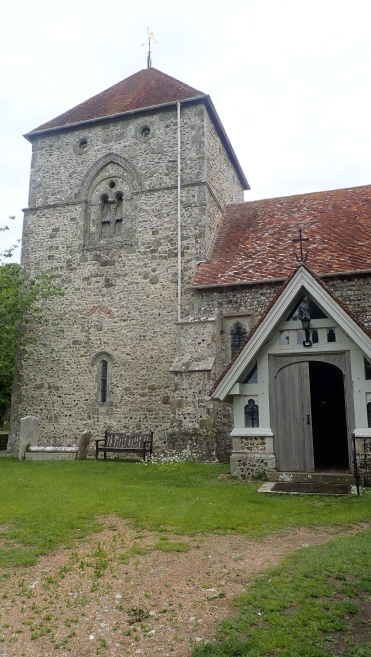 The path now firmly of the hard packed nature was seizing my ankle again like the Broads did slowing me further, I wandered with relaxed purpose towards my goal and stood at a trig point I could see Eastbourne and my final destination. I was happy, happier than I had been on any other run yet, the scale of running 100 miles over 4 days began to sink in, the furthest distance yet I had accomplished and boy was I proud of myself.

Down I went approaching my target, then I heard clapping and cheering, to my surprise the youngsters from earlier were waiting and welcoming me into Eastbourne. We chatted for a while and here I went a little mad, for some reason had in my head that I needed to finish at Eastbourne pier, once I had trekked all the way to the pier I then realised that the finish was back where the youngsters were.

I laughed shrugged my shoulders and snapped some shots before I went in search of my digs.

Booked in, I set about washing the manky body and then noted my feet, I had cankles, massive pregnant feet testimony to my 103 mile journey.

I was not comfy and my next adventure to find food was a slow waddle to the fish and chippy, I was fed but achy. I had completed 103 miles over 4 days in some pretty naff weather and was successful, I was proud of myself, proud of what I had achieved on my own.

I wasn’t looking forward to tomorrow’s journey of London, it filled me with dread, but for now I was comfy in bed and ready for sleep.